Last semester in help study, students were solving a problem to find out how fast an object would be moving right before it hit the ground, if it were dropped from 1 meter.

One student thought that it would be moving at 10 m/s, because 10 m/s/s is the acceleration due to gravity, and it had fallen 1 meter to get that speed.

A second student responded that it would take a whole second to reach that speed (not a whole meter). He added that it should take 10 meters to reach a speed of 10 m/s.

I like both of these students' thinking, because it helps remind me of something: There are many conceptual pieces to acceleration that make it difficult to understand. One of those pieces is the concept of instantaneous velocity, and how it is different and related to constant and average velocity.

See, the first student is thinking that, in freefall, 10m/s of speed accumulates in 1m of distance. It doesn't. It accumulates over 1 second of time (no matter how much distance). The second student seems to get the accumulation of speed over time idea (at least in words), but is thinking of the 10 m/s accumulated as if it were the constant or average speed. While the ball will end with a instantaneous speed of 10m/s, it's average speed over the entire trip down will be 5 m/s, meaning it only covers 5 meters not 10.

I think all of that is fine, but I think there's a better way:

I want to think about instantaneous speed as something like this: The speed you would measure if you could somehow keep the object from gaining or losing speed (long enough) to measure.

You don't NEED a limiting process to do this. All you need is a ramp. 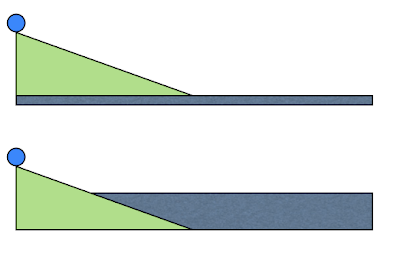 If I want to measure the instantaneous speed of a ball somewhere along the ramp, I just stop the ball from speeding up or slowing down beyond that point. By making the ball go flat, I can measure it's constant speed, and that will be a good measure of how fast it was going right before it went flat.

If I want to profile the speed of the ball in many places along the ramp, I just repeat the procedure for various locations along the ramp. This has lots of extensions: you can change it up by starting it with some initial speed. You can ask students to predict how the final speed will compare to speed half way down. You can ask them to compare the d/t on the ramp to d/t on the flat part. Yah, yah, yah.

Second thing: This allows students to approach the idea of instantaneous speed without a limiting process. Now don't get me wrong. I'm going to teach my students to think about instantaneous speed as speed at an instant, and as a limiting process, and as a slope of a tangent line; but I'm going to do that when I need to. When will I need to? When I can't repeat an experiment over and over again. See with the ramp, I can send the ball down as many times as I want and "interrupt" the ball's ramp motion wherever I want. But what if I only have one shot to let the object move? Or what if I am watching a movie on you tube? Or how would you interrupt a ball falling vertically? All you get to do is observe, not experiment. I those cases, I'm going t have to work with my students to find a new method of measuring instantaneous speed.

Third, the "interrupt" method of measuring speed, especially with the ramp, has nice ways of engaging with the relationship among instantaneous speed (anywhere along the ramp), average speed (along the entire ramp), and the constant speed along any flat part. Building them as a set of relationships rather than separate concepts is necessary for students to understand the question this post started with.

I've only taught instantaneous speed this way once, but I thought it went quite well for giving students a way to think about the concept. I'm certainly not saying it's magic bullet, but it's certainly an approach worth consideration.

Email ThisBlogThis!Share to TwitterShare to FacebookShare to Pinterest
Labels: kinematics