"Don't give 'em Components until they Beg"

"Don't give 'em Components until they Beg" ... is a quote from someone's blog I read recently. I can't seem to find it. If this is you, I'll update this post to link and reference you! That post made me reflect back on this story from the frontiers of physics help study:

Update: The original post that inspired me to share this story can be found at Quantum Progress.
Last semester in help study, it was hit-or-miss in terms of attendance. If students were assigned a difficult homework assignment that week, we might have 50 students show up. If it was easy, we might only have a handful. For that reason, we usually assigned 2 helpers to be in help study.
One week, it wasn't particularly busy, and I was watching a group of two students working on a 2d-collision problem with the help of a graduate student. The problem was something like this

A 2kg mass moves east at 2 m/s. Another 2 kg mass is moving 30 degrees south of west at 1m/s. If the two collide and stick together, what will their speed be?

The students and helper were approaching the problem like this:

(a) Set up the conservation of momentum equations in the x and y directions
(b) Find the x- and y-components for the velocity for the mass moving off-axis
(c) Plug in numbers and solve for unknown
(d) Use those unknowns to find the speed and the direction.

Standard solution path, but along the way, they made an error. Can you spot it?

The mistake they made was not taking into account the direction of the ball. There should be a minus sign somewhere above to reflect the fact that one ball is moving eastward and the other is moving westward.
Now, neither the students, nor the graduate student, knew what mistake they made. But since the students had the answer at the back of the book, they knew they had made some mistake.
Now, I didn't know what mistake they had made either. They had been working on pieces of paper that kept the details of their work somewhat hidden from me. So I just let them keep working on it, while I went to another board to work out the problem quickly myself.
Here's what I did on the blackboard: 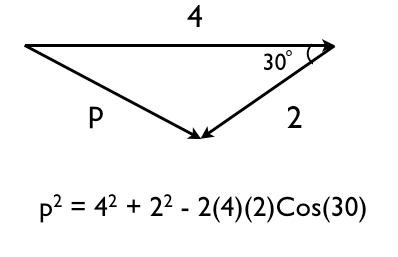 As you can see, my approach was quite different from theirs:
And it does all of this in one diagram and one equation.
I think the students' approach does this:
I'm not saying students shouldn't ever learn to solve problems by using components. I'm just saying that "jumping the gun" by teaching components first can't be a good thing.
I suggest (as others have) doing it this way, if at all possible:

(a) Start with protractors and rulers–make 'em do it the old fashioned way
(b) Then, maybe introduce law of cosines and law of sines–give 'em a trick or two
(c) Then, then maybe, think about introducing components

We ended up finding the error in their work (together), and discussed a little bit about the solution I took. They were really interested in what I had done, because it looked like less work. But the graduate student stuck around even longer to discuss this solution, because he was intrigued by the fact that he had never learned to think about momentum problems this way.
Posted by Brian at 4:21 AM